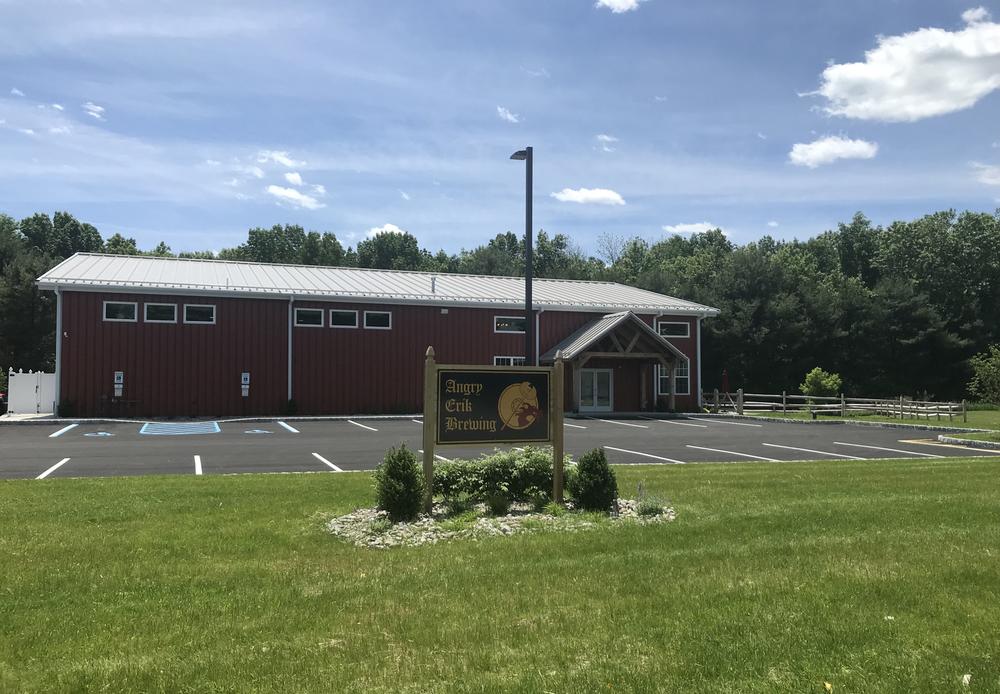 Citra Kisses – American Blonde Dry-hopped with Citra, 5.0% ABV
Every Angry Erik Dog gets his or her own beer & this one is dedicated to our German Shepherd/Border Collie Mix, Citra! Just like Citra, this American Blonde Ale is soft & sweet, with just a kiss of bitterness to represent her “sassy” side. Dry-hopping enhances tropical, passion-fruit aromas and flavors.​
Catching Kumquats- Gose with Kumquats 5.0% ABV
Aromas of freshly peeled citrus, lightly tart & juicy flavors of this tiny little fruit packed with flavor and a hint of salt is sure to refresh your pallet on a hot summer day!

Wandermuch? – Saison, 6.3% ABV
Light & refreshing, this Saison is packed with fruity & floral aromas with an earthy yet dry finish. You won’t have to “Wandermuch” further for another!

Kayewla – Belgian-style Ale, 7.9% ABV
This ale is named for Marquis de Lafayette, the General who fought closely with George Washington in this region during the American Revolution.  “Kayewla” means “fearsome horseman” and was the nickname given to Lafayette by the Oneida Indians for his courage. This ale features typical Belgian flavors including coriander, orange zest and cloves with a slight twist of American hops.
Arctic Moon – Hop-forward Pale Ale, 6.5% ABV – Hoppy Heide #8
Wakatu & Citra hops dominate this refreshingly hoppy pale ale with a tropical aroma and juicy pineapple/citrus flavors accented by light floral notes. A ton of hop flavor without jarring bitterness makes this a smooth, easy-drinker all year round.
M.A.C. – IPA, 6.1% ABV - Alpha-Hop City #1
This juicy IPA is the first in our “Alpha-Hop City” Series where each beer will be named using the first letters of the hops in the beer! M.A.C. features Mosaic, Amarillo & Citra hops and presents an intense passionfruit aroma and juicy tropical flavors with notes of mango & melon.

A.C.E. (Alpha-Hop City #4) – IPA, 6.9% ABV
This New England-style IPA is the fourth in our “Alpha-Hop City” Series where each beer will be named using the first letters of the hops in the beer! A.C.E. features Ahtanum, Citra, & El Dorado hops and presents a citrus hop aroma and juicy citrus flavors with a hint of melon. The golden haze is characteristic of the New England-style with just enough bitterness to make it an IPA.

S.A.L. – Hazy IPA, 7.3% ABV– Alpha-Hop City #2,
This newly released IPA is named by the first letter of the hops it is brewed with: Simcoe, Azacca & Loral. Juicy aromas & flavors of peach, citrus and soft melon surround an underlying bitterness that won’t let you forget it’s an IPA.

¡Viva Verde! Jalapeño IPA, 7.5% ABV – Hoppy Heide #2
This American IPA is brewed to feature the fresh green flavors of the jalapeño pepper (seeds and stems removed to avoid the heat) blended with Citra, Simcoe and Amarillo hops. The result is a truly unique culinary experience of hop flavors. Drop a slice or two of fresh jalapeño pepper into your glass or growler to enhance the fresh flavors, add some heat & remind you to "Live Green!!"
Tongue-Tied Troll – Double IPA, 8.1% ABV – Hoppy Heide #10
Every Troll Baby (our session IPA) needs a daddy... meet Troll Baby's Baby Daddy: The Tongue-Tied Troll! Aromas of pine & tropical fruits followed by resiny flavors of lemon & grapefruit from Citra, Amarillo & Simcoe hops. So delicious it'll have you tongue-tied too!

Shadow Warrior – An American Black Ale, 7.0% ABV
Warrior hops emerge from a cloak of smoky, roasted flavors of a light-bodied stout. A unique bitterness lurks around your taste buds that is not quite roast and not quite hops... it is SHADOW WARRIOR!

Wake Up, Again! - Coffee Porter  8.5% ABV
Aromas of sweet roasted malt, chocolate, & coffee waft into the air from this Porter brewed with coffee...one sip and your taste buds will “Wake Up, Again!”

Freaky Freydís - A Stout brewed with Organic Cocoa Nibs, 7.8%
Freydís, the daughter of Erik the Red, was a particularly heinous Viking, but still a Princess. We use dark malts & roasts to represent her “Freaky” half and a silky mouthfeel with decadent dark chocolate flavors to represent her Princess half.

BOMBER BOTTLES TO GO:
The Dainty Viking - An Elderflower Blonde Ale, 7.6% ABV
Brewed with dried elderflowers of Scandinavian/Germanic origin and wheat, this easy drinking blonde ale has a floral bouquet that will seduce you, but watch out - at 7.6% ABV, she might be more "Shield Maiden" than "Dainty!"

Maxwell Heavy – Scotch Ale, 9.2% ABV
Our first ever Scotch Ale, aka a “Wee-ee-ee Heavy,” plays on the famous TV pig with pinwheels (Maxwell) for its name. Seven different malts combine to form a complex flavor that is slowly caramelized during an extended boil resulting in rich caramel flavor and light smoke undertones.